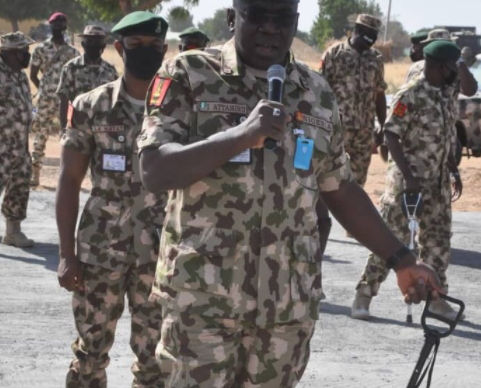 The Chief of Army Staff (COAS), Maj.-Gen. Ibrahim Attahiru, has said that he sees the war against insurgency in Nigeria ending soon. Attahiru who assumed office on January 26 said this while interacting with troops of Special Army Super Camp Ngamdu during his maiden operational tour on troops’ locations in the theatre in Borno on Monday, February 8. He urged soldiers to “remain focused and determined” to end Boko Haram terrorism in the country and work toward ensuring restoration of total peace. “I know you have pushed this war this far, you will continue to do so subsequently. Mr President and Commander in Chief is aware of your good work that you are doing and he sends his greetings.The entire processes when you take over command is that you visit the troops and hear from them. Then you go back, articulate and make sure that the problems are revolved.I have met Commanders, I have received briefs and they told me what their critical requirements are with emphasis to the Military effectiveness. We want to bring this war to an end, soonest. We are bringing out things. You can see the Operation Tura Takaibango successes been recorded. We want to cash on that to ensure total annihilation of Boko Haram insurgents in NigeriaThis we are working in tandem with the troops of the Multi National Joint Task Force of Cameroon. Sooner, we are also going to bring the Chadians for the total annihilation of insurgents in Nigeria; that is what I can tell Nigerians.It is not just the Northeast Theatre, we are equally ensuring our Operations in other parts of Nigeria. We will ensure that people do their job properly so that the insurgency becomes a thing of the past.There are challenges, they are not insurmountable and we are doing our best. I wouldn’t want to start elaborating on these challenges. They are challenges that reduced military effectiveness and we are going to address them sooner than later.On issues concerning equipment and other logistics items, I have been briefed on it and we are making tremendous effort on it. As your Chief of Army Staff, I have reliably been told on the challenge of kitting. In the next couple of weeks, you will have your uniforms and protective gears.Furthermore, I know the issue of overstay in the mission area has been a major problem. We will not do that almost immediately but be rest assured that in the next couple of weeks and months we shall have a standard rotation plan that all of you will have to leave the Theater and be replaced by fresh hands so that we can continue the war.I see this war ending soon so that all of us can return home to join our families.”The post Boko Haram: ”I see the war ending soon”- COAS, Ibrahim Attahiru says appeared first on Linda Ikeji Blog.