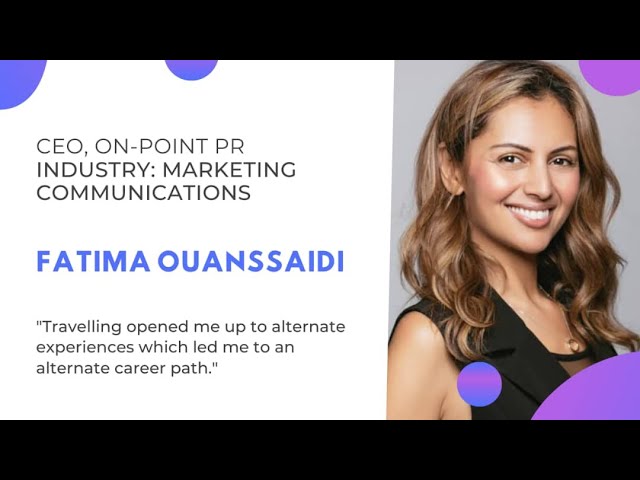 In this episode of “Under 40 CEOs“, Familusi Akin Babajide (FAB) talks with Fatima Ouanssaidi, co-founder and CEO at On Point PR an award-winning PR and communications agency based in Johannesburg, South Africa.

Fatima Ouanssaidi is an experienced executive content producer with 6 number 1 hit shoes on 4 different South African TV channels. She has produced content on 3 continents in over 20 countries.

She is an enthusiastic professional who enjoys working within teams as well as leading them. She has extensive skills in the areas of corporate governance, new business development and financial management, as well as in-depth knowledge of project coordination, cost control and employee motivation practices.

Fatima originally qualified as a lawyer at the University of Bristol in the UK and went on to develop notable expertise in the media, particularly in the areas of lifestyle, fashion, sports and government communications.

Fully dialled into the networked economy, she ensures that On-Point PR an award-winning PR and communications agency based in Johannesburg, South Africa, makes maximum use of ICT in order to maximise outcomes for its clients.

Watch part 1 of the new episode below:

The post Fatima Ouanssaidi of On Point PR talks Finding an Alternate Career Path through Travelling on “Under 40 CEOs” appeared first on BellaNaija – Showcasing Africa to the world. Read today!.