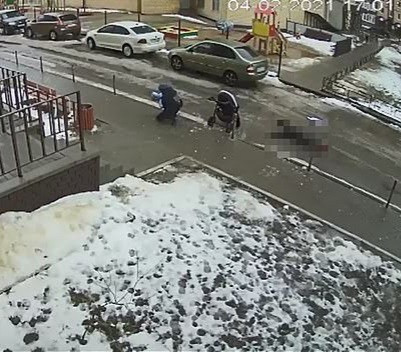 A five-month-old baby has died in Russia after a man jumped from the 17th floor of a building and landed on its pram.  The incident captured on CCTV, occurred at around 5pm on Thursday, Feb 4, in the south-western city of Voronezh.  Footage shows the child’s mother leaving an apartment block pushing a pram with her child Ilya inside. She turns onto the street and is seen walking along the pavement. She then turns to the left to cross a road, pushing the pram out in front of her, when a man falls from above. As he falls he lands partially on the pram, hitting the baby and knocking it out onto the tarmac. The mother is then seen rushing to her child while the man remains motionless on the tarmac. 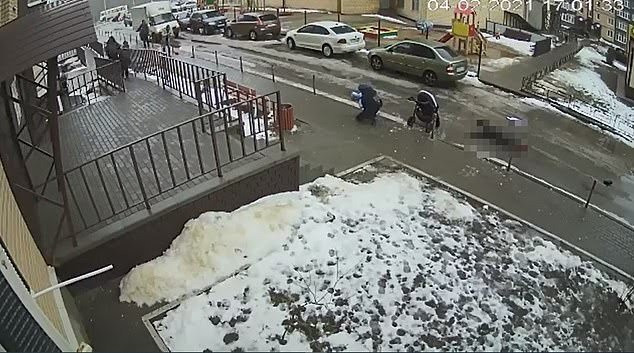 The distraught woman can be seen picking the baby up and holding it in her hands while reportedly crying to people nearby for help.  Shocked witnesses called an ambulance and the police. Paramedics arrived at the scene within several minutes and tried to revive the child.  But despite all the efforts, the baby died.  The man was also pronounced dead at the scene, having died immediately in the fall, according to reports.  Local media reported that the baby was the woman’s firstborn child. A police source confirmed: “The man who fell upon the pram died. “The 5-month-old baby, who was inside the pram, died in the ambulance.”The post Five-month-old baby is crushed to death when man jumps from 17th floor of building and lands on pram appeared first on Linda Ikeji Blog.