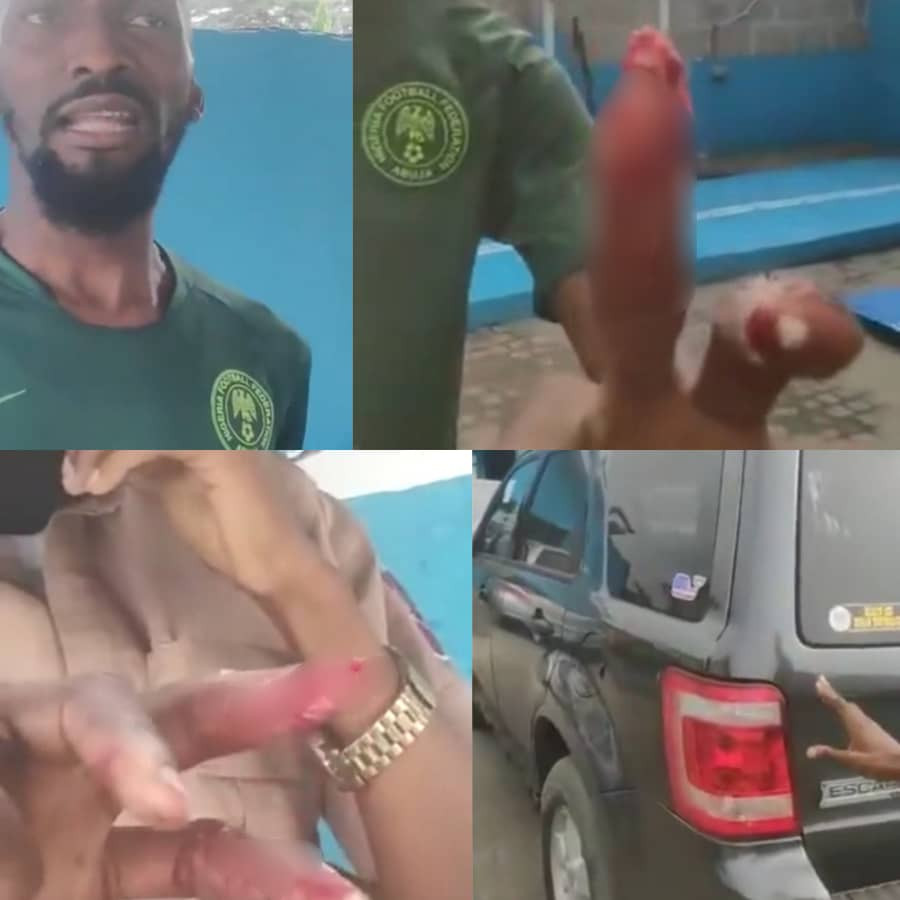 The Federal Road Safety Commission FRSC has reacted to the trending video of a Nigerian man, Muyiwa Akinbola, accusing its officer of inflicting an injury on his finger over his violation of traffic rules. In the trending video, Muyiwa alleged he was arrested in Lagos for using his phone while driving. He claimed the officers took him to their office and asked him to pay a fine. Muyiwa said he paid the fine but the officers held on to his car keys. He said the officers forced his phone from his hands while he was recording and this led to an injury on one of his fingers. The FRSC has now released a statement stating its own side of what transpired. Read below  ”The attention of the Federal Road Safety Corps has been drawn to a trending video recently being circulated online, showing one Muyiwa Akinbola, a traffic offender, who claimed his finger was damaged by FRSC patrol team in Lekki, Lagos State during the course of his arrest for violating established road traffic regulations.As a public friendly organization, we consider it expedient to bring to the notice of the general public, the true picture of what transpired during the arrest.The investigation revealed that Mr Muyiwa Akinbola was apprehended on Wednesday, 3/02/2021 for Use of Phone While Driving (UPD).Upon other checks carried out on the vehicle, it was discovered by the patrol team that the vehicle had no number plates visibly displaced at the appropriate spot on the vehicle.With the growing rate of car theft recorded on our roads in recent times, the team pressed on him to ascertain the status of the car. When confronted about the vehicle registration, the offender got infuriated and series of arguments ensued after.. which he left to the bank to pay his fine thinking that could stop the necessary investigation into the status of the car.When he came back to secure the release of the vehicle, he was further interrogated about a Commercial number plate (KTU 116 XY) purportedly belonging to the vehicle, placed on his dashboard to which he offered no explanation.The checks carried out by the Command also revealed that the Number Plate belongs to another vehicle entirely which raised the bar for suspicion and gave the officers reasons to doubt the ownership of the vehicle under reference.Seeing that he could not provide required proof, the offender left in anger & came back with his friend, wife & baby & impressed on the wife to make the trending video, claiming that his finger was injured by the personnel & threatened to attack the command with Mobs.To ensure effective display of justice, CM, Dr Boboye Oyeyemi has directed the Lagos State Sector Commander to carry out thorough investigation, with a view to reveal the crux of the matter & forward the outcome of such investigation to the National HQs for necessary actions.In the same vein, as an organisation that does not harbour any form of indiscipline, and unprofessional conducts in its operations, the entire team involved in the case have since been recalled to the Lagos State Sector Command for interrogation.Members of the public are therefore advised to continue to believe in the transparent system of the Corps, as the outcome of the investigation & actions taken will be communicated as usual to the public”        View this post on Instagram           A post shared by Lindaikejiblog (@lindaikejiblogofficial)The post FRSC reacts to viral video of a Nigerian man claiming his finger was damaged by one of its officers appeared first on Linda Ikeji Blog.