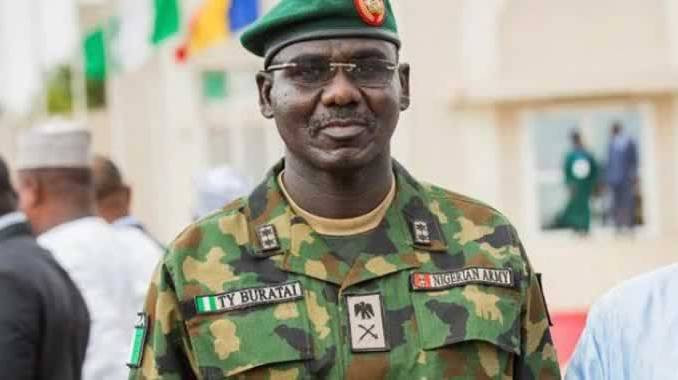 Immediate past Chief of Army Staff, Lt Gen Tukur Buratai (Rtd) has reacted to the People’s Democratic Party (PDP) kicking against his nomination as a non-career ambassador. Recall that the PDP had described the nomination as a plot to shield the ex-Service Chiefs from investigation over the “killing of innocent Nigerians and crimes against humanity” under their leadership.  Addressing journalists after a special gala night organised for him by members of the 29th Regular Course Association of the Nigerian Defense Academy in Abuja on Saturday February 6, Buratai said he would not respond to PDP’s statement because he is not a politician. He said;  “It’s an honourable retirement and also an honourable appointment.“I’m not a politician, so I have no word for the opposition.“I am happy that in July last year, my officers at the Army headquarters compiled a compendium of my achievements.“In fact, I can’t even remember all the projects that we have executed. Is it in term of infrastructure? Is it in term of capacity building? Is it in terms of training?“Since I was appointed, there was never a dull moment in terms of training.“Remember the various exercises, these are training exercises from ‘Python dance’, ‘Crocodile smile’, and even the latest one ‘Exercise Sahel Sanity’.“Is it in the area of medical? In terms of education of our children and wards, the Nigerian Army University are all great achievements.“I think you can write volumes and volumes of books in terms of the achievements depending on the perspectives you want to take.” Buratai who further insisted that his efforts as the Chief of Army Staff may not be felt immediately, added that the country would be having highly qualified officers in the next five to 10 years “who can carry this military profession to higher heights” because of his leadership. The post Im not a politician, so I have no word for the opposition – Buratai reacts to PDP kicking against his nomination as an Ambassador appeared first on Linda Ikeji Blog.

Is Reki Pregnant? Find Out in the Season Finale (Tested) of “Grow Up or Nuts”