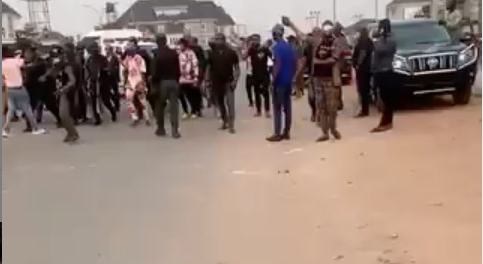 A video which showed moment former Governor of Imo state, Rochas Okorocha’s aide was assaulted by one of Imo state taskforce officials while he (Rochas) was being arrested has gone viral.  LIB reported earlier that the senator representing Imo West Senatorial district was arrested by the police after he led a team of his supporters to reopen the Royal Palm Estate sealed by the state Government. The state government last Friday, February 19, recovered the Royal Palm Estate along Akachi road.  The seizure, according to the team led by Commissioner for Lands, Enyinnaya Onuegbu, was in compliance with the directive of the Imo State gazette on the report of the Judicial Commission of Enquiry on recovery of Lands and other related matters. In a video making rounds online, Okorocha’s aide was seen being dragged by the shirt by an unidentified member of the taskforce before being released as they led Okorocha to a van that conveyed him to the police station. Watch the video below……      View this post on Instagram           A post shared by Lindaikejiblog (@lindaikejiblogofficial)The post Moment Rochas Okorochas aide was assaulted by one of Imo state taskforce officials (video) appeared first on Linda Ikeji Blog.