One dead, seven injured as suspected smugglers and customs clash in Ogun

Popular Abuja disk jockey, DJ Tunice, dies after falling and hitting his head at his home

One dead, seven injured as suspected smugglers and customs clash in Ogun 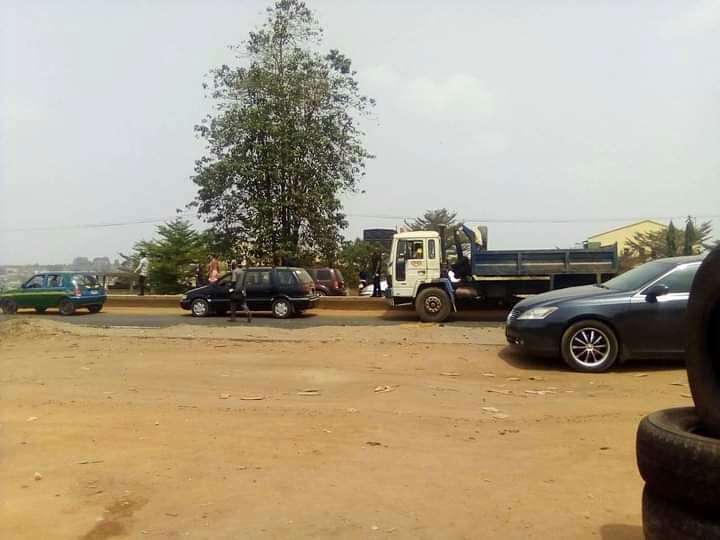 One person was killed while seven others sustained injuries when men of the Nigerian Customs Service clashed with suspected smugglers along Sagamu Interchange/Abeokuta expressway in Ogun State. Three Customs operatives, a military officer and three smugglers were seriously injured while a man said to be a rice trader was killed during the clash which occurred on Tuesday morning.  It was gathered that the suspected smugglers who were conveying imported rice to Samagu from Abeokuta ran into Customs operatives from the Federal Operations Unit Ikeja, who intercepted the goods.  There was said to be resistance from some hoodlums allegedly working with the suspected smugglers, leading to a crossfire with soldiers who were called for reinforcement . 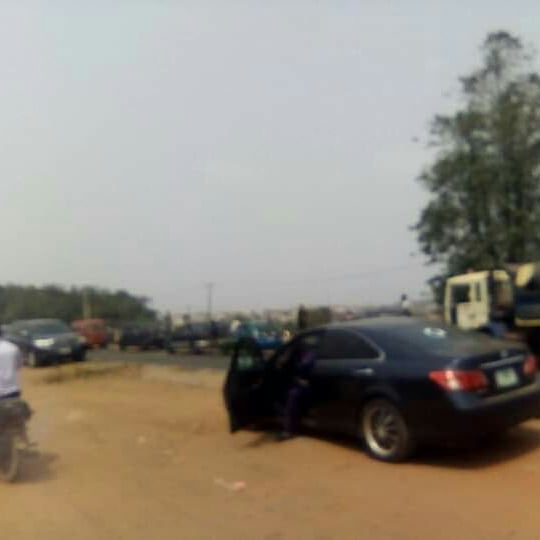 An eyewitness who spoke to the Tribune claimed that those involved are not smugglers but rice traders. He said on several occasions when their rice or car goods arrived Ita-Osun Kobape area of Ogun state, they would always put calls across to customs that their goods had arrived and that they normally collect N5000 on every good most, especially cars. “We buy rice from Abeokuta here and sell it to our customers in Sagamu. Whenever we get our goods from here and when we see Customs on the road, we normally do bookings with them,” he said. “But to my surprise this morning, after doing the booking, on our way going after Siun junction, another set of Customs intercepted our goods from the same office, Federal Operations Union (FOU). We were like ‘what happened? We met your people over there. What happened? They called soldiers for backup. Soldiers squat on the road and started shooting. Four people were injured.” he added. 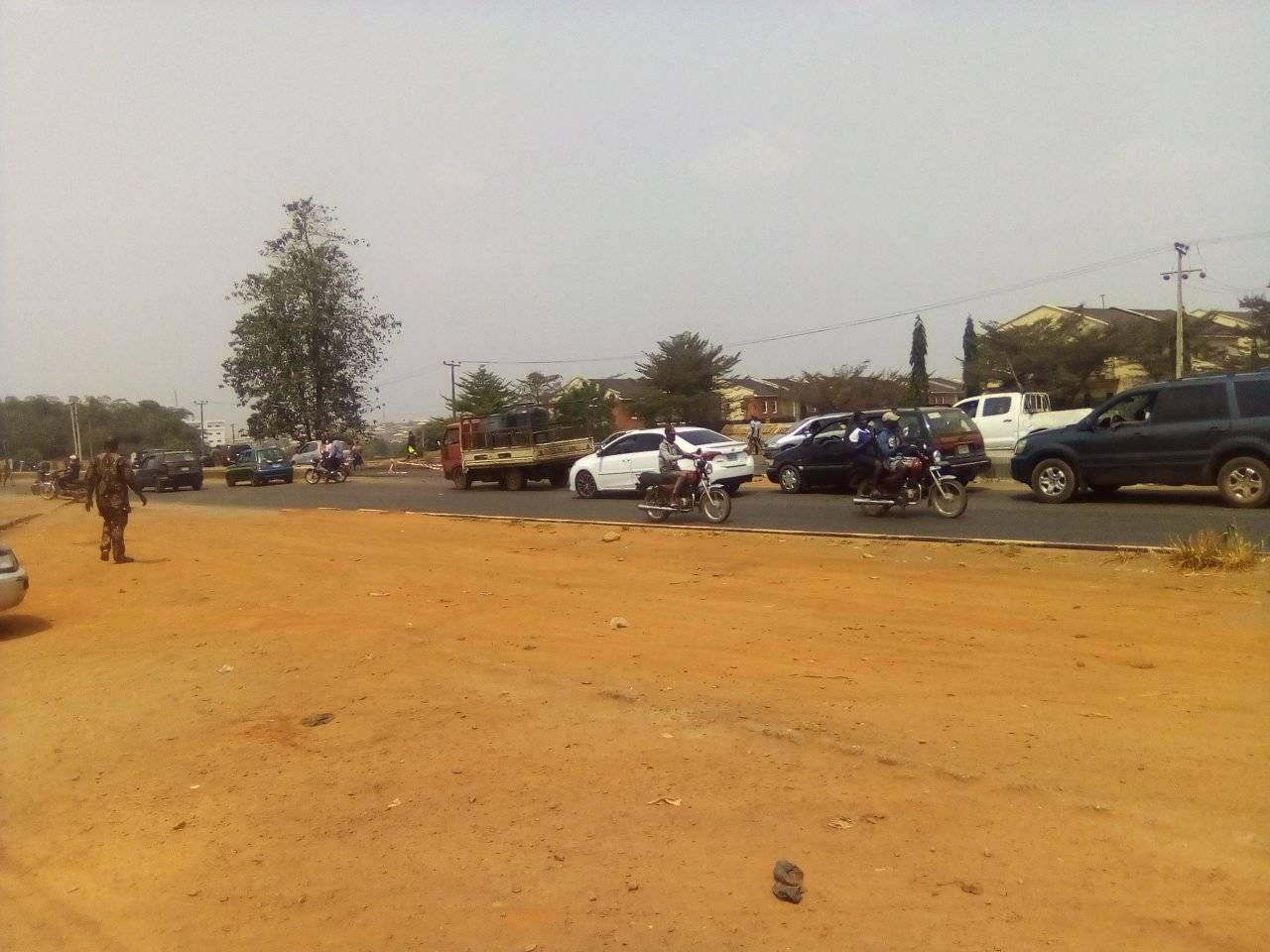 Spokesman of the Federal Operations Unit, Theophilus Duniya, who confirmed the incident, said hoodlums working with smugglers attacked the customs operatives, who acting on intelligence intercepted six vehicles laden with foreign parboiled rice at Abeokuta Expressway. “Upon the interception, some armed hoodlums working with smugglers swiftly mobilized themselves and attacked our officers in their bid to prevent the seizure from being taken away. However, in the crossfire that ensued, our operatives overpowered them and were able to evacuate three out of the intercepted vehicles to the warehouse,” he said. Duniya said three Customs officers and a soldier sustained some bullet injuries from the attack, however kept mum on the death recorded. He said the injured officers were currently receiving treatment at the Customs facility, adding that investigation had commenced into the attack. “The Ag. Controller is very concerned about the injuries inflicted on the officers which were totally avoidable if only the youths were patriotic enough to know that the officers were just performing their lawful duties,” he said. “DC Usman Yahaya, while thanking the law-abiding citizens for supporting their operations, also warned people with criminal intentions to immediately desist from such because officers/men of the Unit are well mobilized, backed up by the extant laws and shall remain resolute at enforcing the laws without fear of intimidation,” Duniya added. He also cautioned the youths to reject being used by economic saboteurs to confront operatives of the service from carrying out their lawful duties. Meanwhile, angry rice traders mobilised and stormed the governor’s office in Oke-Mosan, Abeokuta, in protest against incessant attacks by the Customs. The protesters called on the state governor, Dapo Abiodun to come to their aide as customs officers continued to kill them after collecting huge sums of money from them. “We are here to appeal to the government to come to our aide, we don’t go to Cotonou to buy our cars and rice, we buy them here in Ogun and they cannot continue to kill us. This is what we know how to do, we can’t steal or do money ritual. We settle them every time we buy goods so that they won’t disturb us or us business.” one of them lamented.  The secretary to the State Government, Tokunbo Talabi, who addressed the protersters, assured of immediate interface with relevant authorities to end such occurrence in the state. He also assured that the medical bills of the 4 victims will be taken care of by the state government. 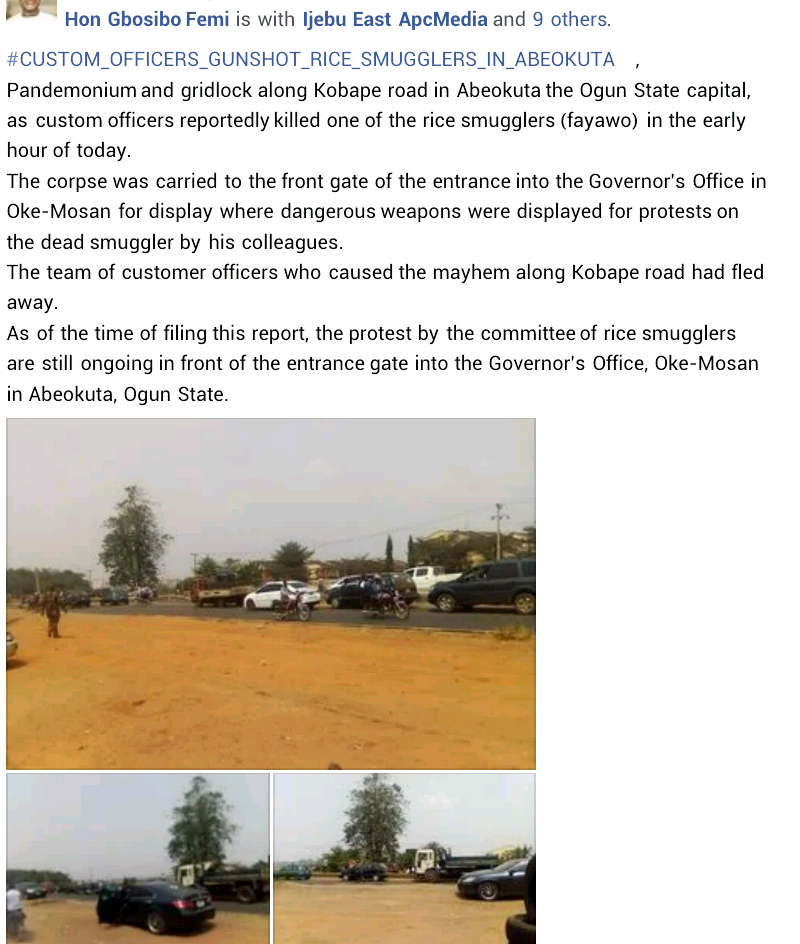 The post One dead, seven injured as suspected smugglers and customs clash in Ogun appeared first on Linda Ikeji Blog.