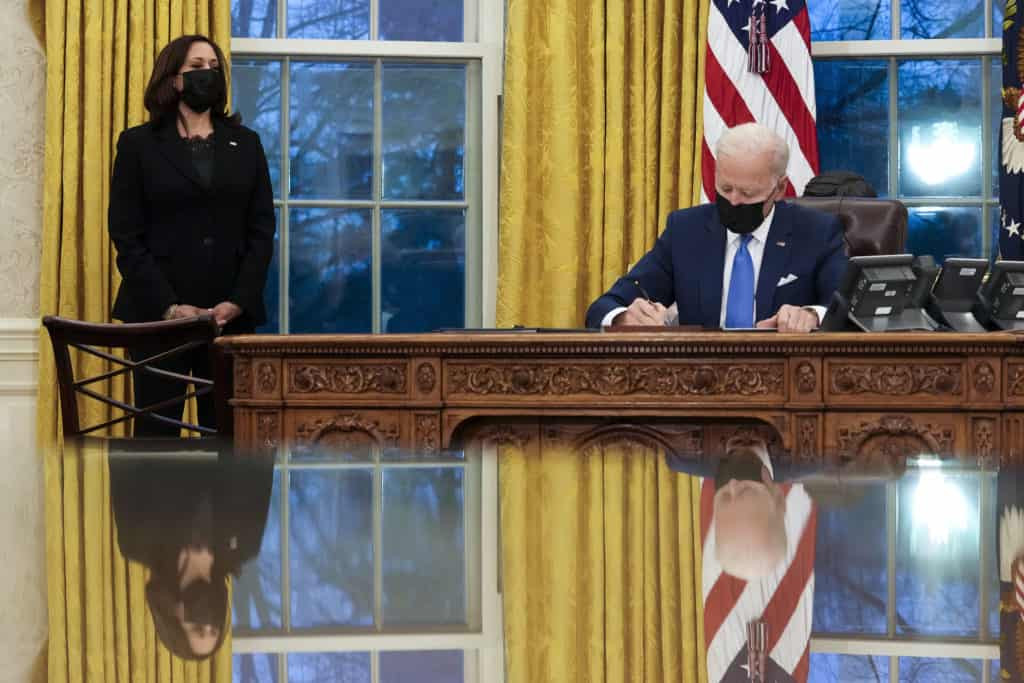 President Joe Biden on Tuesday February 1, signed three executive orders aimed at reversing former President Donald Trump’s hard-line immigration policies including establishing a task force designed to reunite families separated at the US-Mexico border. He signed orders on family separation, border security, and legal immigration. This brings to nine the number of executive actions signed on immigration during his first two weeks in office.  “I’m not making new law, I’m eliminating bad policy,” Biden said at the White House, flanked by Vice President Kamala Harris and newly confirmed Homeland Security Secretary Alejandro Mayorkas, of the stream of executive orders he’s signed as President. “This is about how America’s safer, stronger, more prosperous when we have a fair, orderly, and humane legal immigration system,” Biden said. Alejandro Mayorkas, whose nomination as Homeland Security secretary was confirmed Tuesday by the Senate, will lead a task force on family separation, focused largely on reuniting parents and children who remain apart.  It is unclear exactly how many, but about 5,500 children have been identified in court documents in the Southern District of California as having been separated during Trump’s presidency, including about 600 whose parents have yet to be found by a court-appointed committee. The American Civil Liberties Union, which sued to reunite families, has asked the administration for legal status in the United States for families that have been separated, as well as financial compensation for those families and attorneys at government expense.  ACLU attorney, Lee Gelernt said he would be “extremely disappointed” if the task force limits its scope to helping find parents of the remaining 600 children. A review of border security will include a policy that makes asylum-seekers wait in Mexican border cities for hearings in U.S. immigration court. The White House said it will also do a “top-to-bottom review of recent regulations, policies, and guidance that have set up barriers to our legal immigration system.” It will include a review of Trump’s “public charge rule,” which makes it more difficult for people who use government benefits to obtain green cards. The executive action does not address whether parents who have been deported will be given special protections to come back to the United States to reunite with their children. The task force will only look only at families still separated, a White House official told NBC News. That excludes families who chose deportation to a country they originally decided to flee in order to reunite. The order would also review the Trump administration’s “Remain in Mexico” policy, which has left tens of thousands of asylum-seekers, most of them Central American, living in poor conditions in northern Mexico as they await court hearings to make their cases for protection in the U.S. “We want to put in place an immigration process here that can, that is humane, that is moral, that considers applications for refugees, applications for people to come into this country at the border in a way that treats people as human beings,” White House press secretary Jen Psaki said Tuesday. “That’s going to take some time. It’s not going to happen overnight. The post President Biden signs immigration executive orders and establishes task force to reunite separated families appeared first on Linda Ikeji Blog.