I swear with my mother’s life. I have never met this man before- Destiny Etiko denies allegation of receiving her Prado SUV from a married oil businessman (video) 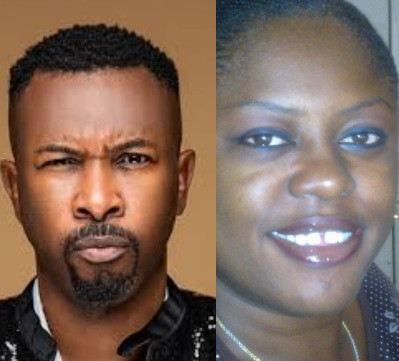 Nigerian Writer, Kemi Yeusfu, has slammed musician, Ruggedman, for questioning the success of female Nollywood actors. Ruggedman in a post shared on his Twitter handle wondered why the male actors are not making much progress, unlike their female counterparts who are buying cars and houses. ”My male actors in nollywood whats going on? Its just the females that are buying cars and building houses left and right. I wanted to come into nollywood but at this rate, I am not coming again”Ruggedman tweeted

Kemi who didn’t like the post, took to her Facebook page to blast him. According to Kemi, most of the top-grossing movies in the last three to five years were produced by females and so the success of female artists shouldn’t be in doubt. She wrote”A glance at the top grossing movies in the last three to five years will show how female producers are leading in Nollywood. But as usual a washed up musician overlooks the positive contribution of women and has ignited a debate to further demonise actresses and women by extension.You can’t even talk the success of Nollywood without speaking of how female faces sold some of the biggest movies and have now gone behind the camera to create blockbusters.But a failed, broke and dumb musician is instigating people against actresses with his stupid post and those who can’t think will join the nonsense talk for innocent women in a country where sex is a currency frequently demanded from women.” 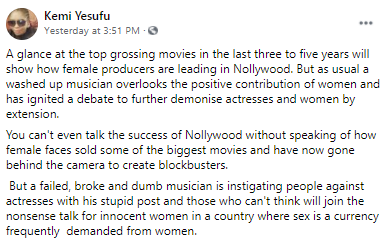